If you were born in 2017, the odds are 1 in 96 that you will die of an Opioid Overdose. Overdose is ranked 5th as a Cause of Death.

If you are lucky, opioids won’t kill you. If not you will be a casualty of the opioid epidemic.

This graph shows that dependent heroin users completing 28 day abstinence- based treatment are 32 times more likely to die of overdose within the first 4 months after ”graduating” then are dependent heroin users who receive no treatment at all. Risk of overdose death is at its highest following discharge from these programs. Rapid detox is also a significant risk factor for overdose deaths after treatment.

Despite its Failure, 90 Percent of Opioid Addiction Treatment Is Abstinence Based

Ninety percent of all opioid treatment is based on abstinence. This failed approach systematically denies access to Suboxone despite the fact that abstinence-only inpatient or outpatient opioid addiction treatment is not effective.

Even After Near Fatal Opioid Overdose, Less than 30 Percent are Prescribed Suboxone

Even after near fatal opioid overdose, only 30% of the survivors get life-saving medicine, like Suboxone, to prevent another life threatening event. Those who don’t often go on to die from a second overdose.

Annual of Internal Medicine August 7, 2018 Medication for Opioid Use Disorder After Nonfatal Opioid Overdose and Association With Mortality: A Cohort Study 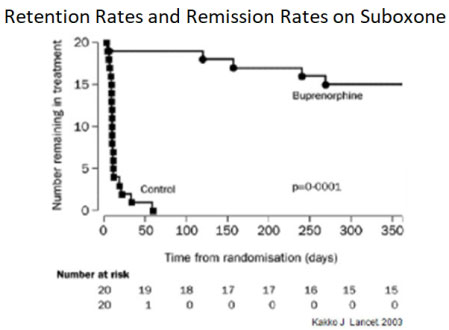 In this study, 75 percent of patients on Suboxone Remained in Treatment at the end of 1 year, and this approximated the rate of Sustained Recovery.

The Language of Recovery, Getting it Right

To understand Suboxone’s high Remission and Recovery Rates you need to learn the Language of Recovery:

Suboxone: Proven Effective Opioid Addiction Treatment in the Privacy and Security of your Doctor’s office, at home in your community, in your Comfort Zone where you continue to work, and care for your children.

A Swedish study compared patients maintained on 16 mg of Suboxone daily to a control group that only received Suboxone for detoxification (6 days). All patients received psychosocial supports. 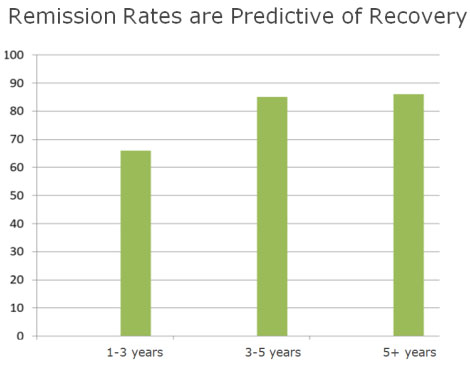 This graph shows the percent of people who will be in Recovery based on the length of time they are abstinent as defined above. It takes a year of abstinence before the risk of relapse is less than 1/2. If you are abstinent for 5 or more years, you probably will stay so.

Warning: Of patients not retained in treatment, there was an astounding 20 percent mortality rate. Opioid related deaths are due to overdose, but also HIV, Hepatitis C infections and other diseases associated with opioid addiction. Based on studies like this one, the FDA recognized that opioid addiction may require years or in some cases lifelong treatment with Suboxone.

It is predicted that while the number of Americans who died from drug overdoses finally fell in 2018 by approximately 5%, opioids were still the drugs most likely to be involved in fatal overdoses.

About 32,000 of the 2018 deaths involved potent synthetic opioids such as fentanyl, which in recent years has become an increasingly common cause of drug deaths. In fact deaths for the year 2017-2918, from fentanyl increased about 20 percent while deaths from opioid pain pills and heroin decreased.

Sadly, many clinicians licensed to prescribe Suboxone prescribe are not doing so. A recent survey found that in 2017 of the clinicians newly licensed or increasing their patient limit, only 75% had prescribed Suboxone and the number of patients treated was very low .

Barriers to prescribing Suboxone included lack of patient demand due to misinformation about it or lack of awareness of its availability in the community, problems associated with treating addiction in general medical practices because of the extra work involved and insurance related issues such as coverage of the medication. A government initiative is aimed at educating the public about the effectiveness and safety of Suboxone and overcoming barriers to its use.