While effective in both, Prescription Opioid Addiction appears to respond better to Suboxone then Heroin Addiction. Some research has suggested that this is because patients dependent on prescription opioids have more favorable prognostic characteristics than do those dependent on heroin, for example do not inject drugs, and have shorter drug use histories. It may be that their brains are not as severely damaged compared to heroin. At any rate patients dependent on prescription opioids have less opioid use (positive drug screens) during office-based Suboxone treatment compared with those using heroin.

Note: The rate of relapse after tapering off (stopping) Suboxone exceeds 90%. In contrast, patients stabilized and maintained on Suboxone have considerably better outcomes than did those who had been tapered off the medication or in any other treatment.

Prescription Pain Pill and Heroin Addictions are chronic recurring diseases that are not cured, but most effectively treated with Suboxone. Just as with any other chronic illness such as diabetes or hypertension that usually require lifelong medication management, outcomes for all opioid addictions are best with long term Suboxone treatment.

Where People get Their Opioid Prescription Pills

OxyContin, Percocet, Vicodin, Methadone and Fentanyl Pain Pills are misused if overused, shared between family members, or friends, or worse get into the hands of kids who take them from the medicine cabinet. In the past Florida’s notorious “ pill mills” were a main supplier for opioid pain medications for the entire East Coast. Law enforcement has put an end to much of this, but Fentanyl and other opioids are being smuggled in across the borders, by ship, or manufactured in the states.

“Sharing” or “trading” pills is not being kind or smart it’s illegal and dangerous. Adults prescribed these medications should keep them safely locked away from curious teens. 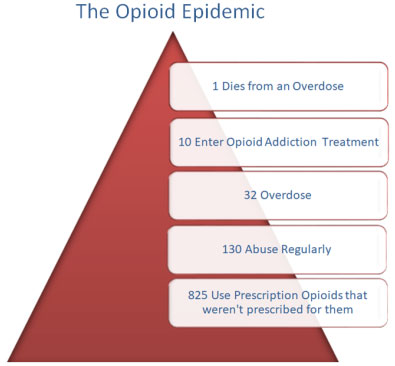 For Every Death from Prescription Pain Pills:

Prescription Opioids are Responsible for the “Opioid Epidemic”

Fentanyl and Carfentanil are many times more potent than heroin. They are often mixed with heroin or in cocaine or are sold as heroin to people who don’t realize how dangerous what they are buying is. Fentanyl is deadly; in 2017, it was present in 66 percent of Floridians who died of opioid-related causes. With less prescription opioids on the street, people are turning to heroin and fentanyl as their drugs of choice.