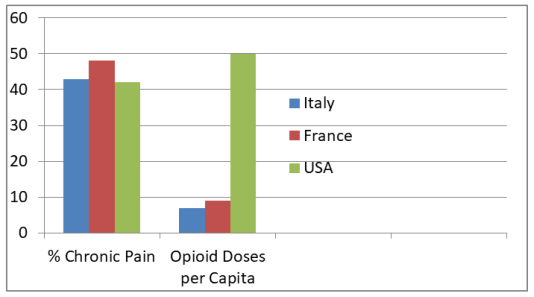 In 2008, an international team of researchers assessed pain problems in 18 countries. The two countries most similar to the United States in their incidence of chronic pain were France and Italy. But that is where the similarities among the three countries stopped.

United Nations data for 2012-2014 show that standard daily doses of opioids consumed per capita were roughly the same in France (8,706) and in Italy (6,246) but reached an astounding 50,142 in the United States. In other words, despite suffering chronic pain at a similar rate as the French and Italians, Americans consumed a staggering six to eight times as many opioid painkillers.

The reason that Americans use so many opioids is not because they suffer more pain than people in other countries. A more probable explanation is that the United States regulates opioid manufacturers and distributors far less rigorously than do in France and Italy and for that matter nearly all other developed countries. America is a curiously friendly country for manufacturers to market opioids aggressively and to donate generously to political candidates and causes. It is those features of America, and not exceptional physical pain that ignited the prescription opioid epidemic.

However this is changing. Laws are restricting the medical and dental use of these drugs, and the amounts and the length of time opioid pain pills like Percocet or OxyContin can bee be prescribed. State and national databases are tracking prescribing patterns of physicians, pharmacies and patients in an effort to crackdown on abusive patterns of dispensing and use. Recently lawsuits against prescription opioid pharmaceutical manufactures have been filed in several states to hold them accountable for their alleged fraudulent marketing practices. These measures are beginning to turn the tide in the fight to control the opioid use crisis.

People think taking opioids is the best way to treat pain. But in reality other non-addictive medicines may be just as effective, including many over-the-counter drugs such as ibuprofen marketed as Motrin or Advil and acetaminophen marketed as Tylenol.

Percentage of people with 50% pain relief (above placebo)

This chart shows the percentage of people whose pain was cut in half using over the counter pain meds compared to commonly prescribed opioid pain medications. Motrin in combination with Tylenol significantly outperformed the prescription opioid medications listed.

Remember to consult your physician before taking any pain medication including over the counter medications such as ibuprofen and acetaminophen.