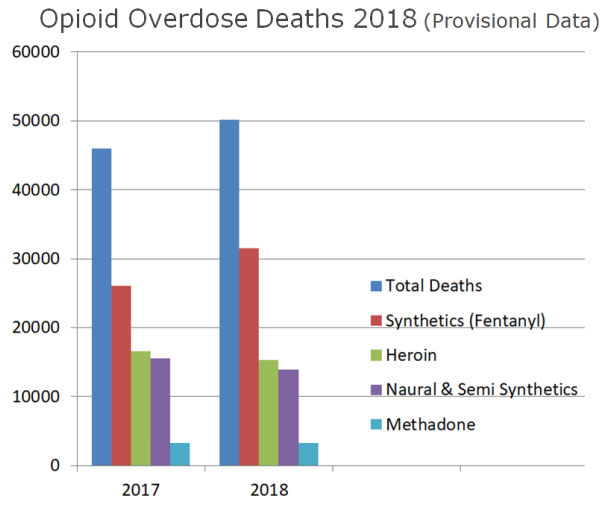 From 2017 to 2018, deaths from Fentanyl increased by about 20 percent while deaths from heroin decreased 8 percent, prescription opioid pills decreased 10 percent and Methadone decreased 2 percent respectively.

After years of significant increases, provisional data from the US National Center for Health Statistics and the Centers for Disease Control has predicted that the number of Americans who died from drug overdoses fell in 2018 by approximately 5% reversing a 20 year upward trend. This is a small but noteworthy step in curbing the deadly effects of the substance abuse crisis.

As in previous years, opioids still are the drugs most likely to be involved in fatal overdoses. About 32,000 of the 2018 deaths involved potent synthetic opioids such as fentanyl, which in recent years has become an increasingly common cause of drug related deaths. From 2017 to 2018, deaths from fentanyl increased about 20 percent while deaths from opioid pain pills and heroin decreased.

The implementation of evidence-based therapies such as Suboxone and Sublocade used in treating opioid addiction, and the increased availability of Narcan to all opioid abusers contributed to the decrease opioid overdose deaths.

The estimates are a welcome change from years of sizable increases in fatal drug overdoses. Between 1999 and 2017, the number of annual drug overdose deaths ballooned from about 17,000 to more than 72,000. However, the 2018 estimate of overdose deaths still represents a significant increase over the numbers recorded just two decades ago. Still the downturn from 2017, however modest, suggests that efforts to improve the efficacy and availability of substance use treatments hopefully are starting to show results.